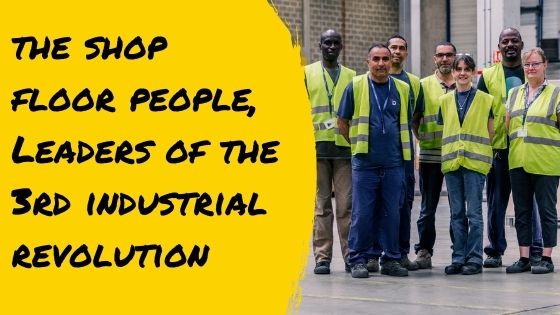 They say that “the past must advise the future,” so let’s start with some history! 🤓

Why Are We Talking about the Third Industrial Revolution?

Well, because there have already been two!

But let’s dig deeper and discuss what were, and perhaps still are, the greatest indicators of the industrial revolutions.

The First Industrial Revolution began in the second half of the 18th Century (we’re not going to fight over the exact year—there isn’t one).

Its main indicators are the steam engine, the textile industry, the iron and steel industries and the railroads.

The Second Industrial Revolution began in the second half of the 19th Century (same comment as above about the exact year).

It is characterized by electricity, the internal combustion engine, chemistry and pharmaceuticals.

The Third Industrial Revolution began in the second half of the 20th Century (no comment).

This time, it is characterized by nanotechnology, biotechnology, information technology, and cognitive sciences (NBIC) as well as sustainable growth.

In fact, since the 1980s (the second half of the 20th century for the sticklers), we have entered a world where the boundary between products and services is slowly disappearing.

And this is only the beginning.

Because, of course, an industrial revolution takes time.

An industrial revolution = A century 💯

The first two industrial revolutions each lasted a century.

More specifically, they each took place over two half-centuries:

Half a Century of Technological Developments

A half a century of technological developments that resulted in a range of affordable and user-friendly products.

Half a Century of Developing Products, Services and Solutions

A half-century of developing products, services and solutions that were driven by demand (users) and no longer by supply, as well as the emergence of a large mass of individuals and companies able to buy them.

And of course, when a product meets the market’s needs, it works!

Would a Concrete Example Help? Here You Go!

This was just the first step in the timeline.

The technology of the steam engine allowed the railway companies to expand exponentially with the train, a product that continues to be successful (despite some technological evolutions, and that during strikes it’s less convincing!).

What Does This Mean for the Third Industrial Revolution?

Let’s assume that the “one industrial revolution = one-century” equation will apply to the Third Industrial Revolution as well.

If that’s the case, we are (still) in the 1980-2030 half-century of accessible supply made possible by major technological developments. That’s why we see a lot of “Industry 4.0,” “Blockchain,” “Big Data,” “Artificial Intelligence,” etc.—except in the daily life of shop floor workers!

We are about to experience the half-century of demand development for NBIC products and the development of a mass market with off-the-shelf products that address real-world problems. All based on these emerging technologies!

How Does This Lead to Operational Staff Leading the Third Industrial Revolution?

Technologies from the “Industry of the Future” Are Coming of Age

It’s no secret. The factory of the future will be highly connected and digital.

Plus, the technologies that allow for that connection and digitalization are reaching maturity:

Isn’t that great? That’s why these technologies are industry standards!

Okay, So Not Exactly for Shop Floor Workers Yet! But, Why Not Soon?

Digital Technologies Have Yet to Experience the Evolution That Took Place between the Steam Engine and the Train: Utility before Technology!

In other words, digital technologies must pass the use case stage by answering two main questions:

When the Use Case (Utility) Becomes the Issue, Factory Workers Take Back the Power!

That last question deserves a blog post of its own… in the meantime, tell us your thoughts on our socials !

If you want to know more about our apps, and especially Alex, ask us here!